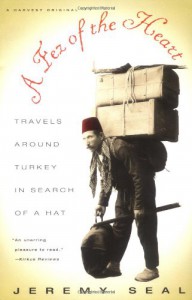 "Europe observes Turkey's growing pains through suspicious eyes, seeing a country that walks a geographic, ethnic, and cultural tightrope, balanced uneasily between two worlds; a bridge between East and West with a foot in both camps, but with her heart in neither."

Turkey is simply amazing. They were on the losing side of the conflict during World War One, and then promptly fought the Turkish War of Independence to wiggle free from under the thumb of the allies. They have charted their own course ever since. As I was growing up, the romance of Turkey always had an allure to me. For those of us in the West, Turkey has always proved to be a ally, a Muslim country that we felt comfortable with and who felt comfortable with us. For forty years they have been custodians of our nuclear weapons providing a checkpoint against a potential Soviet/Russian assault on Europe. It is kind of crazy that they did that for America and Europe, putting themselves on the front lines of what would have been World War Three, and I hope we never forget their role in providing a bulwark long enough for the Cold War to dissipate peacefully.

Jeremy Seal found a fez in his attic which inspired him to not only learn to speak Turkish, but also spend a significant time in Turkey immersing himself in their culture. The theme of this book is his search to understand the origin of the fez, and also as it turns out to understand the truly bizarre relationship that Turkey has had with headgear.

The problem with travel writing is a lot of times, especially for an article in a magazine, a travel writer basically parachutes in and hopes he finds some kind of story to write in the couple days that the magazine has given him to actually physically be in the spot he is supposed to be writing about. Most of the writing is done once they return home. They spruce the article up with a bit of research, check that their word count fits the box the editor has given them, and then they are off on another all expense paid trip to somewhere else. God love 'em, but as a rule I wouldn't put much faith in those articles providing you with anything more than a heavily colored snapshot of a place that may have been experienced for only a few hours by the writer.

As I mentioned Jeremy Seal has logged not hours, but months and maybe years in Turkey, so I trust his impressions, although we are reminded throughout, by his reactions, that he is looking at the culture through the long lens of Western conjecture. Poke a stick at it and see if it moves. He reveals a bit of impatience with a culture that comes to a halt for pray.

"The receptionist's forehead lay between outstretched palms upon the counter in front of him. Every so often he would lift his head a few inches to offer up rhythmic mutterings. And whenever he did so, I would lean forward with a raised finger to signal my presence. I was beginning to worry about the time, and increasingly hoped he was working up to a devotional climax. It was the old dilemma: he had a God to talk to; I had a bus to catch. I respected his God, but I also knew that the Turks respected their bus timetables.

Settling his bill would have to wait.

From a Western perspective Turkey is the most modern and progressive of the Middle Eastern countries and the reason is one man named Mustafa Kemal Ataturk. He was the hero of the revolution and his goal from the beginning was to Westernize his country. He separated Islamic law from secular law. He allowed women to vote. He banned the turban.

And replaced it with the fez.

Turkish Fez on the young man in the photo

And then Ataturk decided that the fez was too non-western as well and banned it. He encouraged everyone to adopt a brimmed hat that was especially controversial because it was not conducive to prayer as the brim got between the head and the ground.

Are you confused yet? I had no idea that Turkey had such a headgear issue. Men were actually hanged for wearing the fez after the hat was banned by the government. Regardless of the ban Turkey will always be associated with the fez and now tourists from Europe buy them more as a joke than as a piece of Turkish history. Just to add one more head whipping change Ataturk decided, in the end, that wearing no hat at all was best. An understandably confused population did their best to comply with the wishes of their venerated leader.

Seal criss-crosses the country and one thing that is never in doubt is the reverence which everyone he talked to had for Ataturk, even though they didn't agree with any of his views. It sort of reminds me of talking to Republicans about Ronald Reagan. They hold him up as the paragon of the party and yet if he were running for president today they would not agree with any of his policies. They will brook no criticism of his policies and simply will not believe that he raised taxes or could have been involved with an arms for hostages deal. The conception that people have of him has far exceeded the man's deeds. I want to share one such conversation that makes the same point about Ataturk.

'I am Ataturk's greatest admirer,' Ali Bey told me. But Ali Bey also told me that he was not a rim-wearer, unlike Ataturk. Nor, in this alcohol-free village, did he drink alcohol; Ataturk had drunk raki, the local Pernod with muscles, to distraction if not to death. Like most of the men in the village, Ali Bey supported Refah, the Islamic Welfare Party, and its call for the restitution of the sheriat or code of Islamic law. He would not brook the notion of the women of the village voting or even holding political views although they had been granted the vote in 1934-by Ataturk. Ali Bey seemed to revere Ataturk in spite of himself.

Turkey, as expected, is a complex society, not easily categorized from a Western or an Eastern perspective. Ataturk had an alarmingly overbearing influence on the culture of Turkey, bringing them reluctantly into a "modern era". Through my Western eyes I have to say Ataturk did us a great favor and at the same time made Turkey relevant in European and Middle Eastern affairs. Turkey is a natural bridge between two philosophies; a culture that I hope will continue to benefit from the influences of the West as well as the East. This book gave me a peek into a country that is in the midst of flux, a country trying to be European; and yet, as a majority much more comfortable with more traditional Islamic beliefs. Turkey is a country I can't wait to experience for myself.