WHILE THE CITY SLEPT BY ELI SANDERS 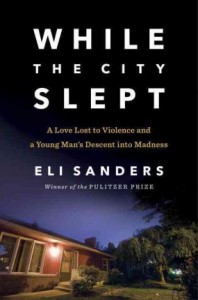 ****Eli Sanders won the Pulitzer Prize for his compassionate reporting about this crime.****

”They had feared him, and it was fear of a certain kind. Not the primal, salable fear of violence, not fright of the unexpected arriving with sudden brutality from an unknowable beyond. Theirs was fear of a known man and an outcome not yet known but likely to be grim. Fear of a person who, regrettably, had lived and delivered pain already, a man intelligent enough to impress yet with seemingly no handle on when his disjointed thoughts, speech, and actions might be headed. Or, if he did have some premonition, no firm brake, internal and external.”

Sometimes crime is very easy to understand. Someone gets mad and kills their spouse, someone desperately needs money and robs a convenience store, or someone embezzles their company. We can understand the frustrations that motivate such crimes, but what we have a harder time understanding is randomness. A crime that doesn’t have a neat bow tying together the motivation and the deed.

I’ve puzzled over many acts of violence, trying to bring the threads together that culminated in such a seemingly irrational result. We want to understand because with comprehension we feel safer, in control. We can even convince ourselves that this violence has nothing to do with us because we will never find ourselves in a position to allow someone to hurt us...like that. Reading about or hearing about violence, for most of us, is just a blip in our day, a blink of the eye, a shake of the head, and maybe a brief moment of reflection. We then watch a news story about a puppy saved from drowning.

A crime happened in this book, and if there had never been a crime, there would have never been a book, but this book is about more than a crime. It is about the failure of our society to understand that the crime is happening long before the final act of violence. I was pleased to see that the publisher has listed this book as a Social Science book instead of a True Crime book, though when I was a bookseller I would probably put the book in both sections. True Crime readers are ravenous for new material, and this is a book I would have wanted them to read. This is a book that goes beyond genre. Comparisons have been made to In Cold Blood because of the lyricism of the writing, and also because Sanders pushes beyond just the facts to discover a greater truth than just innocence or guilt.

We are very good at putting people in prison, but almost incompetent in our ability to treat the mental illness that contributed to their acts against society. Isaiah Kalebu finally did something that forced all of us to pay attention to him, but we had numerous chances to help him before things in his head reached critical mass. ”It was now a few weeks after his twenty-third birthday. In the span of four months, he had run a route that is typical in a system that routinely fails people like him, a route that led from his mother’s care to the police, from the police to the emergency room at Harborview, from the Harborview emergency room back to his mother’s care, from his mother’s care back to the police, and finally, from the police to jail.”

”What happened to him? How does somebody become this guy?”

Isaiah’s father was a strict and distant person. It is hard to say which hurt Isaiah the most: the occasional spats of hard discipline or the fact that his father had very little interest in him. None of us like to be ignored. We all need nurturing, and it is even better when we get positive attention from more than one person. Having layers of people who care about us give us multiple chances to be sustained by some well meaning advice or an act of kindness. America may put too much emphasis on independence. One of my aunts told her son to pack his bags and be out of the house as soon as he turned 18. She did relent and let him finish high school. In Europe, it isn’t unusual to have several generations living in a house, all contributing to the collective wisdom of the household, but probably also, at times, contributing to the discord as well. People have to learn to get along. Many hands shape each family member. A person growing up in that type of household has many examples to show him the way to live his life.

On his mother’s side, Isaiah is the fourth generation of a family tree filled with cases of mental illness, some treated, some not, some treated well, some treated not well at all. She does what she can for Isaiah as she fights her own demons and tries to hold herself together to stay out of the mental health care system. Too many of us see mental illness as a weakness, something conquerable with will power. It has taken me years to understand how incredibly naive that thinking is. If I had any doubts about the need for continued education about mental illness and the need to change our collective thinking about mental illness, Sanders eliminated any uncertainty with the way he systematically shows how we continue to fail people with mental illness. We criminalize when we need to treat.

”What Isaiah still didn’t have was a relationship with someone who had time to hear his whole story, someone who could sit alongside the young man, talk with him, look with him into his experiences, its beginnings, its possibilities. Instead, he continued to be seen in pieces. That is, whatever piece of him seemed most pressing in whatever particular authorities had to deal with him at a given moment.”

If we are judged by one of our acts and one of our acts alone, without someone caring enough to bring the full mosaic of our life together, the person we are seen to be becomes a very simplified distortion. We become angry that people or the system are looking at us with blinders on and can’t possibly see who we are when the sum of our parts are actually brought together. Isaiah was angry.

Isaiah finally did something that got our full attention.

He raped two women and killed one of them. ”Indifferent silence. Unanswered cries. A murderer and rapist running away through the night. Cruelty unchecked.”

We had chances to control this outcome. Isaiah was telling us through one action after another that he was building up like an overwound clock to something more tragic. Someone with the right qualifications could have looked at his mother’s past and his relationship with his father and seen a recipe for problems. Couple that knowledge with his actions, and one could unequivocally determine that the young man needed help. We failed him. We failed his victims. Sanders makes a great case for why the justice system needs to be updated and streamlined so that we see the accused, the sum of the whole, as well as the crime. He makes an even better case for why we all need to understand mental illness. Few of us are not touched by it either directly or indirectly. We need to quit seeing mental illness as embarrassing and as a battle that everyone must fight alone.

I was impressed by the compassion that Sanders brought to the victims Teresa Butz and Jennifer Hopper, but also to Isaiah Kalebu. We find out who they were/are beyond the ring of police tape when all three of their lives intersected and changed forever. If we think of this book as a True Crime novel, I can without hesitation say that it is the best I’ve read since In Cold Blood. If we consider this a book about social issues, I can say it is the best book of that genre I’ve ever read, but any book that expands my thinking and moves the needle on how I see an issue is certainly more than a book trapped in any one genre. Isn’t that one of the definitions of literature?

Check out my In Cold Blood review