THE EXPERIMENT OF DREAMS BY BRANDON ZENNER 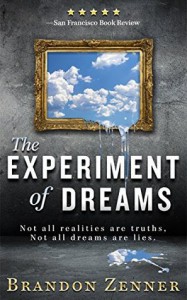 ”For centuries, artists have attributed their masterpieces to dreams, yet so much of our dreams remain shrouded in mystery, forgotten. Now, both artists and ordinary people will be able to record their compositions in full detail. We could have their art created, painted, framed and delivered. Not only are we creating whole new fields of science, but also an entirely new genre of art will emerge. Sleep art…”

I keep a white pad on the nightstand by my bed because every so often I have a dream that is so vivid, so interesting that as soon as I wake up I know I have to jot down my impressions or by the time I’m in the shower all that I remember of that dream will simply float away with the hot mist. Wouldn’t it be nice if our minds supplied us with a URL that we could use to get back to where the memory of a dream is stored? I’ve had whole plots of short stories handed to me by a nighttime muse. The mind does amazing things when the clutter of our awake lives has been temporarily shuttered in the attic or discretely swept under the Persian rug.

Benjamin Walker is a professional guinea pig. He lets science use his body and mind for experimental purposes. He has a particular gift for sleep studies, especially studies involving dreams. While asleep, his mind opens up like a rare orchid. He drinks too much. Tragedies from his past weigh on him like wet cement. Even the studies he participates in that used to excite him are now becoming redundant and dull.

The timing couldn’t have been more perfect for Dr. Peter Wulfric to approach him with a new invigorating study involving dreams. With the way his brain works, he is the perfect candidate for the research they are needing to do. The study is funded by a reclusive millionaire named Timothy Kalispell. The end game is to build a machine that can record people’s dreams.

The implications and applications for a system that can download your dreams to your PC every night are staggering to think about. If Steve Jobs were still alive, he would be gobsmacked that he didn’t think of it first.

The machine is called Frequency Responding Lucid Transmitter, or Lucy for short.

They fly Ben all over the world and have him look at art, not just look at art, but basically scan art into his mind. St. John the Baptist, Salvator Mundi, Evening Landscape with an Aqueduct, Baptism of Christ, The Raft of the Medusa, Mona Lisa, and Man in a Hat Gazing Upwards, all are, for lack of a better term, downloaded into his brain. Kalispell has an obsession with art and wants to use Ben’s brain and Lucy to reproduce exact copies down to the finest details of the world’s most compelling art.

The nanobots floating around in Ben’s bloodstream that help record everything from him into Lucy are not passing out of his body, but replicating. He is starting to have dreams that are not his own. He is starting to remember things that he couldn’t possibly know. He begins to lose a grip on what is real and what is just pieces of dreams.

He was no longer attempting to decipher between what was real and what was dream.

”At times, his vision became fuzzy, like looking through a piece of smoky glass. Other times his vision cleared to see everything in such vivid detail that the image seemed burned in his retina, and grew brighter with his pulse. The sparkling array of dazzling colors spread to the periphery of his vision, slowly encompassing everything he saw. The colors were jagged, with patches of grey and black, and soon he wasn’t sure if he could count his fingers if he held his hand before his face.”

Who needs science, after all, when you are experiencing the world so vividly that there is no need to understand why?

As Ben becomes more destabilized, it becomes more and more clear that the past he has been avoiding is now part of the present, and he must reenter the muddy canvas of his troubled life to have a chance at a future. People he trusted with his life turn out to be part of a conspiracy of deception that leaves Ben precariously balanced on the edge of self-destruction or just as close to salvation.

I must say Brandon Zenner has penned a story that certainly resonated with me. What if we could harness the creative powers of our dreams? The optimist in me is thrilled with the possibilities. Even a boring accountant from Hoboken could capture the last sparks of creativity remaining in his gin soaked brain cells and create something beautiful. We would all see the world inside our heads differently. We would marvel again at what we are capable of. The pessimist, of course, sees the applications for evil. It could be used as yet another way for us to be exploited by governments or corporations. The last vestiges of privacy that we have would be peeled clear to the core of the onion. We would stand naked before them with not one thought exclusively our own.