LORD OF MISRULE BY JAIMY GORDON ”She had her highborn air, dexter, and right next to it she had her lowborn air, sinister, which also came of being a Jew, an outcast, a gypsy, and not giving one goddamn. She could up and follow a racetracker, a coarse adventurer, if she so chose. Moreover you could get to her through her body. It was a black, rich, well-watered way, between rock faces.

The word podzol came to mind.

You could ask all you wanted of that flesh, you could whisper outrages into her ear and, no matter what she said, the flesh would tremble and fall open to you.” 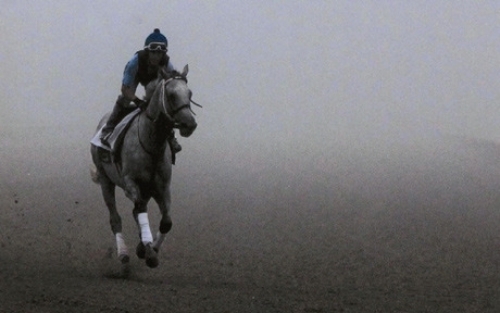 It all begins when Maggie Korderer shows up at the Indian Mound Downs in Wheeling, West Virginia, in a battered, white Grand Prix and asks for four stalls for horses. She has no idea she is about to meet a cast of characters whose names sound like they stepped out of the pages of a comic book. These people are more tangible than most real people: Suitcase Smithers, Old lady “gyp” Deucey Gifford, Kidstuff the Blacksmith, Medicine Ed, and Joe Dale Bigg.

She fell in lust with a racetracker named Tommy Hansel. Medicine Ed sums him up quickly: ”But the young fool? Something have made him think he big when he small and strong when he weak, something have set him thinking he the king when he ain’t nothing. Long as he think he king, he can’t see how low he is, don’t know to ask the bad luck to leave him while it’s still time, and put it back on them that brung it and send it back to the Devil where it come from.”

Sometimes the Devil is in desire, or in a horse, or in a man, and sometimes it can be in a woman, too.

”When he came home in the afternoon from the track and she from the paper, they were in bed in five minutes, with all of it: newsprint and horse manure, saddle leather, ink and hashish, past performance charts and food pages, sweet feed and recipes for blancmange and corn souffle. The sheets literally reeked of all that. The sweat-damp canyons of the featherbed were gritty with their mixture. In some way their unmiscible lives fused.”

Maggie didn’t expect to fall in love with horses. She came to the business for the man, but ended up staying for the horses. They are beautiful animals, even the ones that have fallen so far down the ladder as to be running at tracks in $5000 races where anyone could buy any horse in the race for that amount. It’s a brutal existence with Goofer Powder and syringes full of juice that take a little more of the soul of the animal during every race.

Jaimy Gordon is at times so lyrical that I found myself rereading lines several times just to squeeze all the honey out of the language. ”An hour before Little Spinoza’s first race they sat around in a funeral mood--all except Little Spinoza who stood in his bucket of ice as cool as a Tiffany cocktail stirrer, dreaming in black jewerly eyes of emerald alfalfa and clover of Burmese jade.”

This is a literary book; and yet, there are also these great hardboiled lines that add this beautiful edge to the writing. Joe Dale Bigg is a gangster who fixes races to keep his cash flow stable. He gets one whiff of Maggie, and he wants her. He wants to hurt her. He has a plan on how he will arrange things so that she has to come to him. ”Hey, didn’t I figure you right? Isn’t that what you like? Somebody who can reach his hand up inside you and tell you what disease you’re dying of.”

Medicine Ed is watching this witches brew of chaos and knows better than just about anyone what the future will be. His eyes are ancient eyes glutted with the past. The possible outcomes of the narratives of all our lives have all been played before. When Ed, Maggie, and Deucey buy a horse in an attempt to be more than they’ve ever been before, they have allowed the Devil a chance to tickle their necks with his hot breath and whisper in their ears the consequences of failure.

Thoughts and dialogues masquerade as each other. He said she said has been stripped from the prose. Quotation marks have been eliminated from Jaimy Gordon’s computer keys. The style is brilliant, earthy, and immediate, but can pose a challenge for some readers. I found it invigorating and genuine, as if I were there seeing the words in their eyes before they had time to move their lips. 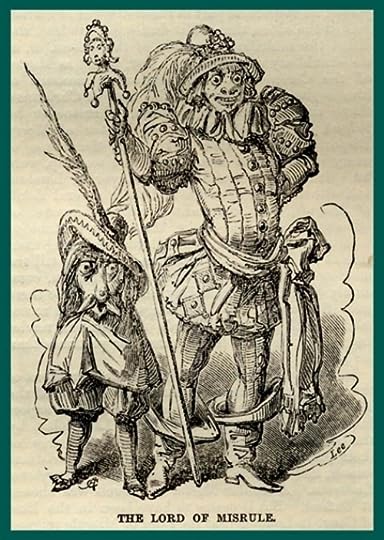 From Wikipedia: In England, the Lord of Misrule — known in Scotland as the Abbot of Unreason and in France as the Prince des Sots — was an officer appointed by lot at Christmas to preside over the Feast of Fools. The Lord of Misrule was generally a peasant or sub-deacon appointed to be in charge of Christmas revelries, which often included drunkenness and wild partying, in the pagan tradition of Saturnalia. For the purposes of our story, he is horse arriving in a whirlwind to throw a hoof through the hopes and dreams of a trio of fools.

This book first came to my attention when Entertainment Weekly published their map of the United States showing the books that best represent each state. This was the choice for West Virginia.