”I know what they need. Perfection all the time would drive them mad. For every perfect little town, there’s something ugly underneath. No dream without the nightmare.” 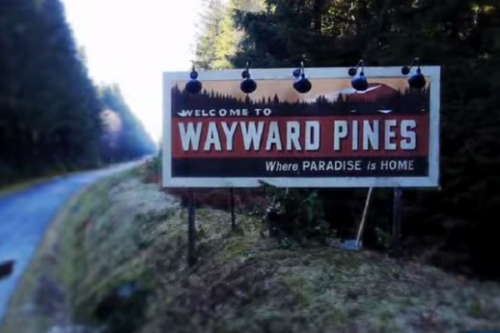 We all have secrets we carry around with us. As a species we aren’t really good at keeping secrets, even those rattling skeletons that could prove detrimental to our lives. In the end, most of us end up telling somebody. You can swear someone to secrecy, but the same itch, the same need to tell someone that compelled you to tell them, is whispering to them from the corners of their brain. This powerful urge, maybe with some help from some uninhibiting wine or soul exploding sex, will eventually gain the upper hand, and those locked away words will spill. They swear that person to secrecy, and so on and so on until everyone you know...well...knows.

So the only way to keep a secret is to tell NO ONE.

Recently appointed Sheriff Ethan Burke is carrying the granddaddy of all secrets. I was trying to think of something in the history of mankind that is a bigger secret. Knowledge of what Brutus has planned for Julius Caesar at the forum?...hmmm...nope. Finding out the Japanese plans for Pearl Harbor on December 6th?...not even close. How about the fact that I travelled back in time and handed Alois Hitler a FREE condom nine months prior to April 20th, 1889? Epic fail! Unfortunately...his appendage was too small to stay covered for the crucial moment (as it turns out that unfortunate disability runs in that family). See, and what did I just do...I told you!!

Guilt is hammering away at him. He has kept secrets (not very well... proving my point) in the past. Big ones like doinking his hot FBI partner Kate, who also is a resident of Wayward Pines. She also happens to be running a resistance movement against the powers that be. No one, except Ethan... well and now Theresa, knows exactly who that might be.

The electric fence surrounding the town hums with high voltage electricity. Occasionally, one of the 461 residents uses the fence to kill themselves. Unfortunately, the smell of their charred flesh just makes people hungry for barbecue. Miraculously, new people show up to replace those who have been lost. They are quickly assimilated into the community. Speaking about the past is verboten. If people don’t accept the rules by joining the rest of the seemingly ecstatically happy people, they are fêted. Yes, there is a big group. Yes, there is a big party. No, those being fêted are not having a good time.

What the FRILL is going on?

As I said when I wrote the review for the first book in the trilogy, Pines, my recommendation is to watch the Wayward Pines TV series first. I know! Shocking! I feel like frog marching myself out to a stone cliff and throwing myself into the sea. The rule is always read the books first. *Sigh* one thing I’ve learned after decades of life is that flexibility, even as your joints refuse to be so, is important in all things. Rules were maybe not meant to be broken, but certainly, they were meant to be bent.

Be the tree that sways in the wind.

Watch the series, there are only ten episodes ( I really appreciate it when American TV shows some restraints with the number of episodes), and if you like the series, read the books. The books do differ from the series, but not by a large margin. In for a penny in for a pound, on to book three.

My PINES review, the first book in the trilogy.